Well, it’s that time of year again — the time of year when I start panicking in twelve directions because there’s so much crafting and writing to do and so little time to do it in!  The Grand Valley State University Renaissance Festival is in exactly six weeks and I should really think about inventorying stock and making some new things, including perhaps a cloak or two, as I’m seriously lacking that department.  Then again, it took about three years to sell the last cloak I made, so maybe I shouldn’t worry about it! 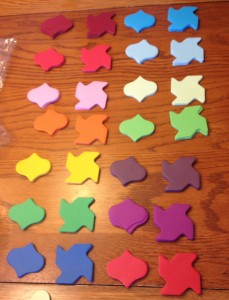 Color spread on my brighter array of pinwheel and ornament tags, which I’ll be debuting at GVRen this year. Prototype cream-colored tags are currently available on Etsy.

Last year’s festival was a mixed bag for me.  I had to buy a brand spanking new tent in the hours before faire opened on Saturday last year because the weight of rain on the roof destroyed my old tent–total bummer, that, right?  On a brighter note, when I got the new tent it was much, much nicer than my old tent–right down to having dome lights built into it!  I’ll need to make a canvas cover for it at some point to help disguise how…modern…it is, but there are worse problems to have to be sure.  It’s a solid tent and I’m glad to have picked it up despite the circumstances.

I debuted my papercrafts at last year’s festival and I did surprisingly well with them.  I’ll be bringing an array of my gift tags for sale this year in addition to my other paper fare that debuted last year.  There will be, of course, my usual array of jewelry as well, and the new square overskirts that I debuted last year as well.  I may do some experimentation with odds and ends for this year’s faire, since I did get the new embroidery machine and it seems a shame not to do some playing around with it for festival, just to add a touch of something different to the same old things.

That will come after inventory, though.  Once I know what I’ve got, I’ll know what I need more of and how much time I’ll have to devote to adding stock.  I’m more ahead of the curve this year than I usually am, though, which is a good thing because I seem to have less and less free time every year in the weeks leading up to faire.

Tomorrow’s my annual trip to Holly, so we’ll see if I come up with anything awesome while I’m wandering around those environs, too.  I’m in the market for some Son of Sandlar boots myself–after doing this for fourteen years, it’s time I invest in an excellent pair of boots.  I priced them out (almost ordered a pair, actually) when I paid a visit to the Great Lakes Medieval Faire and Market a few weeks back and it’s time.  I’ve got them all picked out and it’ll be super hard to wait for them to be made (I have huge calves, so they’re a custom job instead of try and buy), but I should have them in time for the 2015 season.  I’m also in the market for a new bodice and I know a couple of places where I’ll be having a good, hard look (the gents at Crimson Chain typically get my business–they’re the folks from whom I purchased my current green leather) for something pleasing.

Stay tuned for more pictures and updates as faire approaches.  Folks looking for information on the books I’ll be bringing along can hit my personal site at www.embklitzke.com, but as it stands right now, I’l have paperback copies of Epsilon: Broken Stars, UNSETIC Files: Between Fang and Claw, UNSETIC Files: The Measure of Dreams, Awakenings: Book One, and What Angels Fear.  I was hoping to have The Last Colony, Awakenings: War Drums, and even Epsilon: Redeemer ready for this faire, but something tells me it’s not going to happen.  I’m hoping for Redeemer to release sometime around Christmas…but we’ll see what the next few months bring.  (If you’re a fan and have been hoping, though, shoot me an email and I’ll make sure to bring you a hardcopy of the current draft to tide you over until it’s done!)