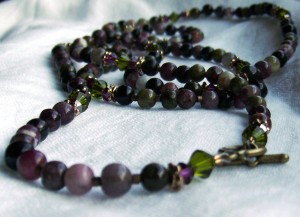 In a few hours, I’ll be setting up a tent (probably in the rain) at the Grand Valley Renaissance Festival for the…fifth time.  I’ve only missed it once since graduation (and that was because I was a bridesmaid in a friend’s wedding a few weeks after festival and was threatened with death if I got sick–so I decided not to go.).

I’ll be there with jewelry, garb, bits and pieces of geekery, Miss Jennie and my boyfriend Mike.  A grand time will be had by all!  I’m also introducing a new product (which I unfortunately don’t have pictures of)–gaming tokens.  They’re about a quarter inch thick and the size of a dime with the letters A-J stamped into them, to help GMs keep track of which enemies are attacking whom.  It was something I always wanted to have as a GM…and now I’m passing that little thing on to others.  They’re made of polymer clay and I’ll be selling them for $5/set of 10 in a little organza baggie. 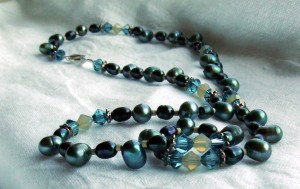 It’ll be Mike’s first experience of actually running a show with me–he’s visited me at one, but he’s never been there for the whole time I’ve run one.  Jen, however, is old hand at this and should be fine.  Despite the nasty Friday weather, the forecasts say that Saturday and Sunday will be beautiful, even if it’ll be a little chilly on Saturday. 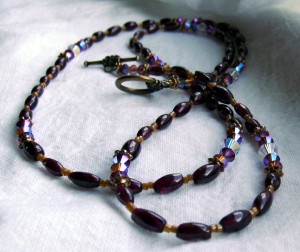 As long as it’s not 30 degrees and snowing, it won’t be the nastiest weather I’ve experienced at a festival…and rain on set-up day tends to be good luck, since that generally means that the weather for the weekend is lovely.

Also bringing some writerly things, including booklets containing an excerpt from Awakenings and a business card with my official site as an author and a free download of my novelette, Falling Stars.  We’ll see how many of those wander away from my booth as freebies.

Time to finish packing…hope to see a lot of folks at GVRen!