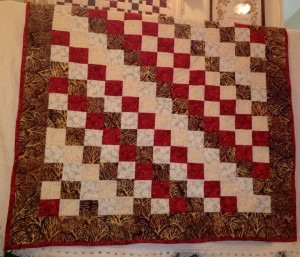 Now, making patchwork quilts has been a thing that I’ve really wanted to do since I was a kid and it’s something that I’ve dabbled in since I was pretty young.  I have tons of half-started projects laying around the house, tucked into bins or shoved in drawers.  I have a stash of fat quarters and yardage of quilter’s cottons and calicos that’s a shame to waste (we’re talking a few bins worth of fabric here–probably as much or more fabric than I have laying around for costuming projects).  That fabric and those projects have been sitting idle, quietly waiting for me to get around to making use of them. 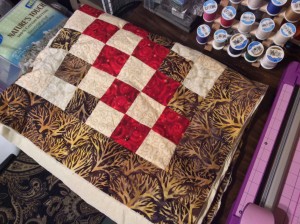 Anna’s quilt before I put the binding on. The binding is in the same red fabric as the squares.

Before my niece was born, I started working on a strip quilt for her.  I’d finished the top by the time she was born, but the hand quilting and finishing took me until her first birthday–and made me vow to never hand quilt anything again!  Still, I managed to finish it, and for my first quilt brought to completion, I happen to think it’s wonderful (and my family and my sister-in-law’s family agreed!).

Immediately after finishing that quilt, I started digging around in my sewing area and found some nine-patch blocks for a quilt I’d started a long time ago for my younger sister, Kendall.  I realized that I was short a few nine-patch blocks, so I made some more over the course of the intervening days, watched a little too much of Fons and Porters’ Love of Quilting (yes, the series from PBS–I have some DVDs laying around because I am really that kind of geek), and spent a Saturday morning cutting background squares before bringing it up to the family room to test layouts. 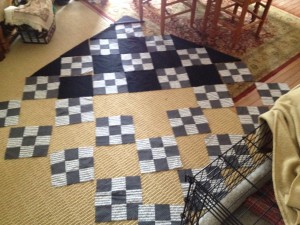 Experimenting with layouts for Kendall’s quilt last weekend–this is actually the layout I ended up going with.

As my mother and I stared at the first test layout, she suggested doing the blocks on point rather than as straight strips–and it was the on point layout that I ended up going with.  I was joking that my sister might not even want the quilt anymore, at which point I’d figure out something else to do with it–but one text message with a picture of the test layout later, and I knew that she still wanted the gift I started making her five years ago.

Over the course of that weekend and the following week, I finished sewing the blocks into strips–this weekend, I’m looking to possibly finish off the quilt top and maybe even finish the whole quilt–it depends on how ambitious I get.

The terrible part is that I’m already trying to figure out what the next quilt will be.

I’m hooked and I don’t think it’s necessarily a bad thing, either.

Detail of a strip from Kendall’s quilt.  She plays upright string bass.  The treble cleft and sheet music fabrics I chose for her and she chose the black and white cross-hatched.